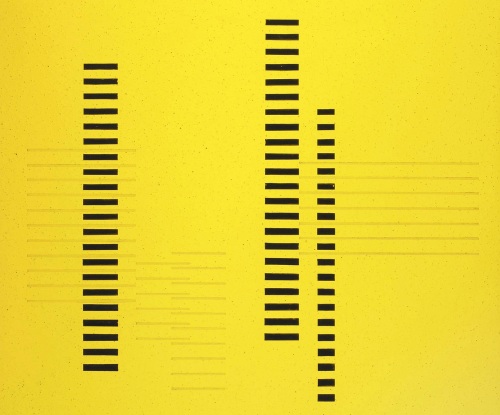 Composed in 1931, Edgard Varèse’s Ionisation is the first piece of Western classical music to be scored for an ensemble comprised solely of percussion instruments. As such, one might expect to be subjected to a one-dimensional barrage of colourless noise over the course of the work’s short duration. Yet what is striking about this piece of music is the degree of sensitivity with which the composer controls the instrumental timbres, achieving an understated grace and eloquence of expression which reaches far beyond more common functional uses of percussion. With only a fleeting contribution from a piano in its dying moments, Ionisation finds Varèse abandoning notions of melody and harmony altogether in order to focus on the minutiae of musical texture, conjuring a diverse array of subtly shaded and intricately detailed soundscapes.

Scored for thirteen musicians and a collection of instruments ranging from bass drums and bongos to triangles and castanets, Varèse assembles and combines this variety of different instrumental timbres with such delicacy that at times the ensemble appears to merge into a single entity. The cavernous opening of the piece is indicative of Varèse’s lightness of touch: at one point the gong and bass drum are struck simultaneously so that the short, hollow sound of the drum appears to hang in the air, cloaked in the metallic shiver of the decaying gong. Throughout the piece, the ubiquitous moans of the sirens (a trademark sound of Varèse’s music) trace long curves through the soundscape, softly shading the atmosphere with an intoxicating air of mystique.

Despite betraying a distinct Futurist influence throughout many of his works, and particularly on Ionisation, Varèse’s music eschews the unrefined cacophony and overt machismo of Luigi Russolo’s “noise intoners” and Art of Noises manifesto. Having moved to America at the age of 32, the French-born composer was deeply affected by the aural experience of living in urban New York. Rather than simply mirroring these sounds however, Varèse incorporates distant echoes of industrial noise into his music in a process of attempting to liberate Western classical music from the tyranny of conventional tuning systems, rhythms and timbres.

On his prophetic quest to compose what he called “organised sound” – which anticipated many subsequent developments in electronic music and ultimately culminated in his 1958 sound collage Poème électronique – Ionisation stands as perhaps the fullest realisation of Varèse’s bold and uncompromising aesthetic vision. This music is at once expansive and intimate, ugly and irresistibly beautiful: Ionisation combines the terrifying cacophony of the industrial world with a profound sensitivity, unlocking the sensuous, human potential of inhuman noise.

Below is a recording of Ionisation followed by a brief listening guide.

Ionisation proceeds as a number of miniature sections, each with a different textural character. The ominous opening of rolling bass drums and gongs gives way at 0:28 to a shuffling passage led by the snare drum and bongos. Following a brief interruption from 0:43 to 0:57, the snare drums continue as new timbral elements are gradually introduced. The next section begins at 2:11 with angular rhythmic statements contrasting the steady flow of the preceding music, continuing until 2:52 when a furtive tinkling of triangles and bells emerges. Agitated figures in the drums punctuate the backdrop of bells and moaning sirens, increasing in resolve until 4:18 when the music unfolds into a spacious texture of stabbed piano chords and chimes. Ionisation then dissolves away in a shimmering mist of decaying gongs, disappearing into the same fog from which it rose.

The recording above is of the ASKO Ensemble conducted by Riccardo Chailly, available on Decca’s excellent two disc set of Varèse’s complete works. I would also recommend Pierre Boulez’s recording with the Ensemble InterContemporain, recently reissued on Deutsche Grammophon.

The similarly percussive Hyperprism and the electro-acoustic magnum opus Déserts would both serve well as entry points for further investigation into Varèse’s sound-world. For other works exploring the extremities of percussion music try John Cage’s 1939 piece First Construction and Iannis Xenakis’ large collection of works for percussion, especially 1979’s Pléïades.